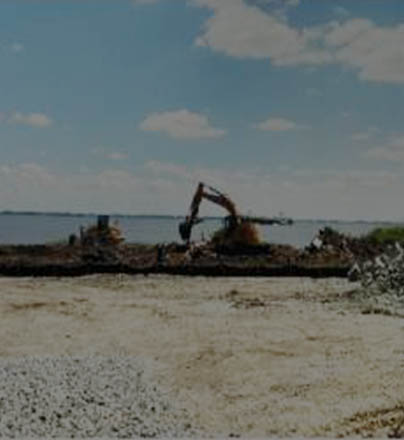 The Governor Bacon Health Center site at Ft. DuPont State Park sits just south of Delaware City, DE. The site includes an area known as landfill area #1, located on the banks of the Delaware River. Portions of this landfill site were submerged at high tide and had begun to erode into the river. The sediments and soils that were eroding were all contaminated with hazardous substances; predominantly lead.

GES was tasked with mobilizing equipment and personnel to install temporary measures such as roads, and fencing, the removal of vegetation and establish and maintain a temporary storage area for hazardous substances. GES was also required to install temporary erosion & sedimentation control facilities, such as a construction entrance, siltation fencing, swales, temporary vegetation and settling ponds, to minimize the release of hazardous substances into the Delaware River during the response operation. GES was tasked with moving all large debris and hazardous substances including lead from the landfill area, which included excavating all contaminated sediments and soils above the high tide line. After contaminated soils had been excavated GES was required to develop an appropriate grade and contour and install a soil cover that would minimize erosion, and provide continued use of the landfill area for recreational purposes and allow for restoration of vegetation cover.